Last Thursday was Annette DaBomb’s final performance downtown at the Gaslamp Speakeasy, and it was bittersweet to me.  I’ve come to love her and her beautiful voice.

And some video I took the week before of Annette singing that great cover song Everyday I Have the Blues.

Taryn Donath plays at the Gaslamp Speakeasy frequently, where she rips on the keyboards and sings her funky, blues, swing jazz, boogie style music. But on this night, the Little Kings were playing with Dane Terry on harmonica, and she joined in to see this great cover song, Right Around the Corner.

You can find Annette DaBomb and her Bomb Squad band at the Gaslamp SpeakEasy every Thursday night.  I’m a huge fan, and I got there about midnight this week and discovered John January and Chuck Arcilla had joined in as guest musicians.

Here’s John on guitar  playing Eric Clapton’s cover song Key to the Highway with the Bomb Squad (Tony Peterson on drums and Doug Brunell on bass), and Chuck on sax.

For those that don’t know, the Gaslamp SpeakEasy is owned by Hennessey’s Tavern right next door, and both venues have live music.  The last Saturday of every month, talented kids under 21 play blues at Hennessey’s from 2-5pm.

Later that night I caught Stoney B Blues band on the SpeakEasy side.  Stoney is singing a BB King cover song, Why I Sing the Blues, with his band members, Bob Prater on bass, Pat Kelley on keyboard and Paul Carlomango on drums.  It is always dark in the SpeakEasy, but the video is pretty good considering the lighting.

Lafayette can steal your heart with his deep southern blues, romanticism and playful charm, and I try to catch him on Tuesday nights where he plays regularly at the Gaslamp SpeakEasy.

Here he is performing Sonny Boy Williams’ cover song Dr Feelgood, with his band members, Chris Terrell on drums and Ronnie Baumslater on bass.  The lighting is better now at the SpeakEasy, but it is still tough to fully capture Lafayette who almost always wears black.  When the lighting isn’t good, the video gets a bit blurry, but most of it is pretty good.

In this video Lafayette sings about that Little Girl of Mine.  I’m not sure who wrote the song, or who was playing the electric acoustic guitar who was sitting in with them last night. 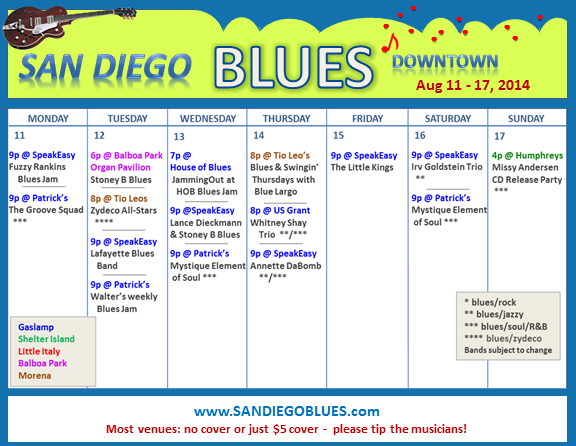 It is another lite week of San Diego blues downtown, and the only blues related music on Shelter Island will be Missy Andersen’s CD release party at Humphreys next Sunday from 4-6pm.  Missy is terrific, and she has lots of R&B blues fans, so get there early!

The only blues you will hear at Patrick’s Pub will be during the Tuesday night jam, and usually that jam has an R&B influence.  But if you like R&B… you will hear that Monday, Wednesday and Saturday there.

The Gaslamp SpeakEasy predictabily has great blues and bluesy jazz Mon-Sat nights from 9p-1am, and it is always good music.  Check out the videos I took of Annette DaBomb this past week, and of Stoney B with Lance Dieckmann.  I plan on getting much more video, so you can enjoy too if you can’t get there.

Thursday night, I was able to catch the lovely Annette DaBomb and talented bomb Squad band members at the Gaslamp SpeakEasy. They are a total delight (and often quite playful) as they perform a soulful mix of blues, jazz and swing jazz, like the Frank Sinatra cover song The Lady is a Tramp in this first video. Accompanying Annette are Tony Peterson on drums, Alan Z (Zundelevich) on piano, and Doug Brunelle on bass, clarinet and flute.

And last, but not least, that great cover song Fever, first performed by Little Willie John and later sung by Peggy Lee, Elvis Presley, Ella Fitzgerald and many others.

Stoney B has been in New Orleans for the last year, and he’s back playing in San Diego to the delight of local blues fans, including me. He is the real deal – a great blues man who plays the guitar and sings with a passion, grit, storytelling and talent you can never get enough of.

He was playing with Lance Dieckmann’s band at the SpeakEasy the past couple of weeks, and that may be where you’ll find him for a while. Here he is performing Jimi Hendrix’ great cover song, Red House. The lighting at the SpeakEasy makes this video a bit grainy and out of focus, but it is worth viewing. I will get more videos of Stoney, and hopefully better quality.

Two of my favorite local bands were playing last night just a block from each other in the Gaslamp.  Fuzzy Rankins blues band was at Patrick’s Pub and Whitney Shay (with her jazzy blues trio) was at the SpeakEasy which had a packed house.  No surprise with Whitney there!

Before Patrick’s got too crowded, I was able to get this video of Fuzzy doing his funked up version of Muddy Water’s great cover song Got My Mojo Working.  His band members last night were Ronnie Baumslater on bass and Michael Minor on drums.

Then I went over to the SpeakEasy to catch Whitney singing, Jodie Hill on bass and Marley Waak on the drums.  Everyone was having a great time. 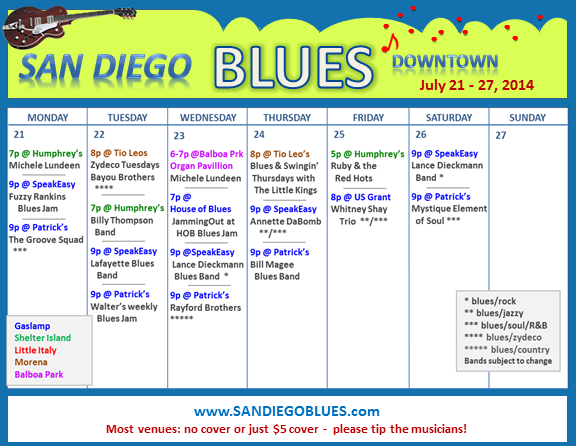