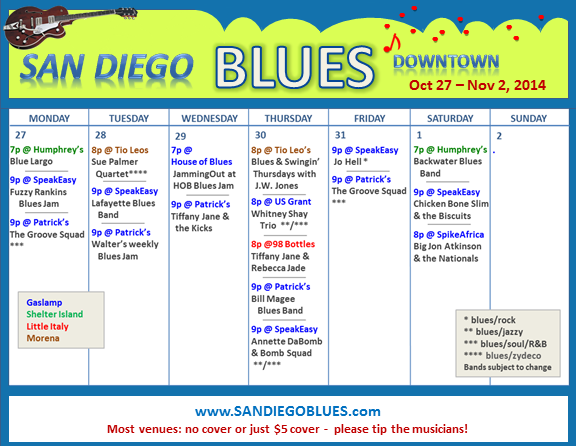 Last week we had lots of blues around town, not quite so much this week.  I have never heard Tiffany Jane, so I’m curious to hear what type of blues she does.  From what I can tell, she’s more pop.  She plays at Patrick’s Wednesday and then she’ll be at 98 Bottles Thursday with Rebecca Jade.  I’ll catch her at one of these.

This is the last week you can catch Annette DaBomb, who will be at the SpeakEasy on Thursday night.  She leaves us at the end of the week, which will be a sad day for me.  So come out to hear her one more time before she goes.

At the end of the JammingOut at HOB jam Wednesday night, Fuzzy Rankins showed up and played with Lafayette Falkquay, both of them incredible lead guitarists.  Here they are having a fun time with Fuzzy singing Stop Following Me Around.  On stage with them are Billy Wear on drums, Kevin Cooper on bass and Justin Fools on harp.  It was a great way to end the night. 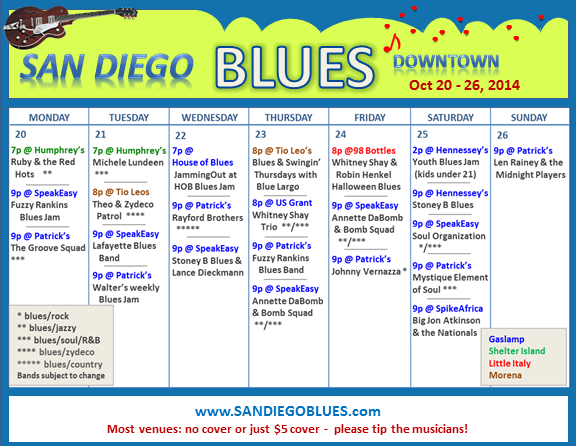 There is quite a bit of San Diego blues happening this week in the Gaslamp.  Check out the bands and jams at the Gaslamp Speakeasy and Patrick’s Pub, as well as Hennessey’s (next to Speakeasy) and Spike Africa.

Jams always bring in great musicians from around the greater San Diego area and from out of town.  The jams happen Mondays at the Speakeasy with host Fuzzy Rankins, Tuesdays at Patrick’s with Walter Gentry and Wednesdays at the House of Blues with JammingOut at HOB, sponsored by BLUSD.

The Youth Blues Jam will be on Saturday from 2-5pm, so if you know of or have kids under 21 who play, encourage them to participate or watch.

And for some pre-Halloween fun, go see Whitney Shay and Robin Henkel do their spooky blues, jazz and soul at 98 Bottles on Friday night.  Or catch Whitney and her trio at the US Grant on Thursday.  Lots of great options this week!!

Congratulations to Missy and Heine for winning the solo/duo San Diego International Blues Competition (IBC).  They will represent us at the annual IBC in Memphis this coming January.  See the video of them from my post 2 weeks ago.

As well as Ben Powell, who won the local competition two years ago.  Here is Ben performing a Blind Willie Johnson cover tune, Bye and Bye I’m Going to See the King.  As Ben shared with us, the songs he likes to perform are the older country blues songs of the 1920s and 30s, and they are wonderful tunes.

Here’s Ben playing and singing his tune Away From Home.

And last but not least, Andres Acuna (who used to play in Annette DaBomb’s band) and Eddie Sadler were also in the final round.  I didn’t get video of them (ran out of memory ;( , but they were also very good.

Last Thursday night I caught Tony Petersen, who is the drummer in Annette DaBomb’s Bomb Squad bluesy jazz band, singing and playing a George Benson cover tune This Masquerade.  He’s accompanied by Alan Zundelevich on keyboards, and a bass player who was filling in last week.

They were playing at the Gaslamp Speakeasy, and you can catch them there the next two Thursday nights and this coming Friday night.  Don’t miss Annette before she leaves us at the end of the month.

We celebrated Victor Franklin’s 60th birthday at the JammingOut at HOB blues jam, and many of his friends showed up to play with him.  Unfortunately most of the video I took didn’t turn out so well, but this one of his good friend Theo Bellow on accordion turned out pretty well.

Theo is singing and playing Big Chief, with Victor on bass, CJ Hutchins on guitar and Ric Lee on drums. 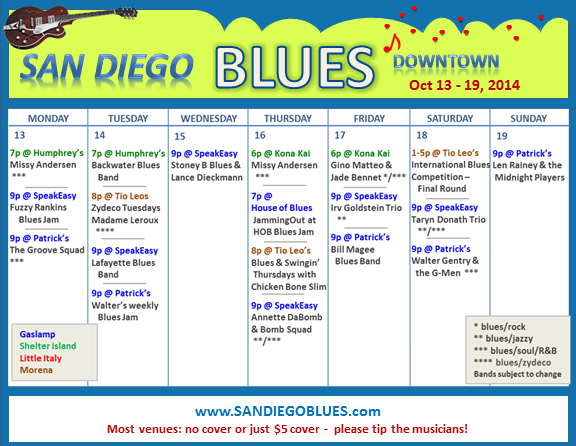 We’ve got blues every day this coming week, even Sunday, which is a treat.  For those of you who go to the weekly blues jam at the House of Blues (JammingOut at HOB), be aware that it will be held Thursday this week (not Wednesday).

Saturday afternoon at Tio Leo’s will be the final round of the San Diego blues competition for duo performers, where the finalist (from the 4 who have been selected out of the first 2 rounds) will represent us in the International Blues Competition (IBC) in Memphis next January.  Missy & Heine Andersen, John Frazer, Ben Powell, and Andres Acuna with Eddie Sadler are in the final four.

This Wednesday night jam at the House of Blues, Robin Henkel (winner of this year’s San Diego Music Awards for best blues in San Diego) came to the jam with Mama Tokus (visiting San Diego once again from southwest England).

They have been performing together all around town during her visit, and here is a delightful song called Too Much Butt by Saffire, the Uppity Blues Women.  On stage with them is drummer Ric Lee.

We also heard Jacinto Casteneda singing that great cover song Got My Mojo Working and playing guitars along with a newcomer to town Jo Hell.  They were joined by Harmonica John Frazer, Reggie Ford on drums and Sam on bass.

Two of my favorite soulful blues singers in San Diego were at the Stoney B Summit last Sunday night, and they were fantastic.

Michele isn’t called the Queen of Steam for nothing.  Here she is singing one of her original songs, Song Inside Me (title of her CD – great CD!, which you can get link to it on my Tunes page).  She’s singing with Charles Burton on guitar (who also performed on her CD), Ric Lee on drums, John Simons on bass and special guest Irv Goldstein on the organ.

In this video Michele is singing another one of her originals, also on that same CD, called Blues is a Feeling.  Great song.

Stoney B hosted his third annual blues summit Sunday evening at the TinRoof, and dozens of blues musicians and blues bands participated to a packed crowd.  It was a fantastic event, and I was able to get a lot of great video.

Alex Gomez was there with his Gomez Blues Project band, including a new blues singer in town, Cerissa Cole.  Wow, she has an incredible voice.  Here she is singing Aretha Franklin’s cover song Rock Steady.  She is with Alex Gomez on guitar, Victor Franklin on bass, Tony Peterson on drums & vocals, Walter Gentry playing the sax & Doc Holiday on keyboards.

And this next video is of them performing cover song Chain of Fools.

And last they did a Poppa Chubby cover song Stoop Down Baby, This tune features Walter Gentry on sax doing a solo and Alex Gomez on guitar.