The JammingOut/BLUSD jam on Wednesday nights brings in new faces every week, and last night was no exception.  Bryan Whelan (on guitar) and Mellie Frances (vocals) showed up and they performed cover song, Thrill is Gone, with Irakli Aladash on bass and Steve Douglas on drums. 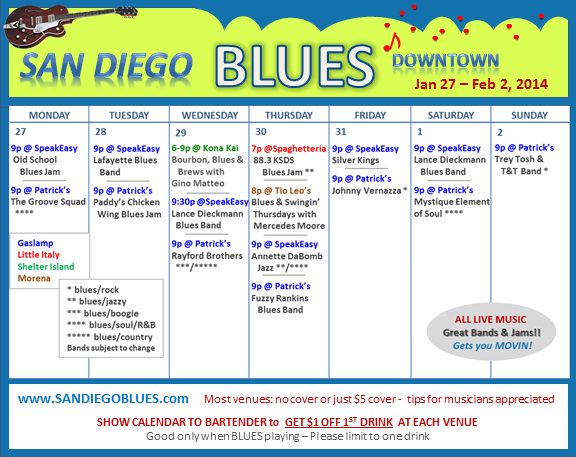 It is another lite week for blues around downtown, but there is still blues every night.  There is also the House of Blues jam on Wednesday from 7-11pm, which isn’t on the calendar.

As I mentioned last week, Jimmy Love’s is closed until the spring and will reopen under a new name.  We won’t know until they reopen if blues bands will playing there again or not.

Croce’s moved to Bankers Hill (now Croce’s Park West at 5th and Olive), and this week Fuzzy Rankins’ band will be playing there on Wednesday (7-11) and Lady Dottie & the Diamonds will be there on Friday (8-midnight).  I should be able to get them on the calendar next month, but for right now Croce’s is holding off on the calendar drink discount as they get re-established.

I’m out in Memphis, getting to hear some of the best blues bands from all over the world down on Beale Street, in the heart of the blues.  Our own Fuzzy Rankins Blues Band, representing the Blues Lovers United of San Diego, raised the bar early in the International Blues Competition.

People were commenting on how good they were, and that is saying something. There were some incredibly good bands competing to win the title.  While Fuzzy’s band didn’t win, which is a disappointment, they stood out among the hundreds of bands who came to perform.

Here they are playing at the Rum Boogie Café on Beale Street.  Bruce Hutcherson was explosive on drums, Tom Mylett was keeping the bottom nice and strong on bass, Hindy Bare was rounding it out on the organ, and Fuzzy was ripping it up and doing his thing. 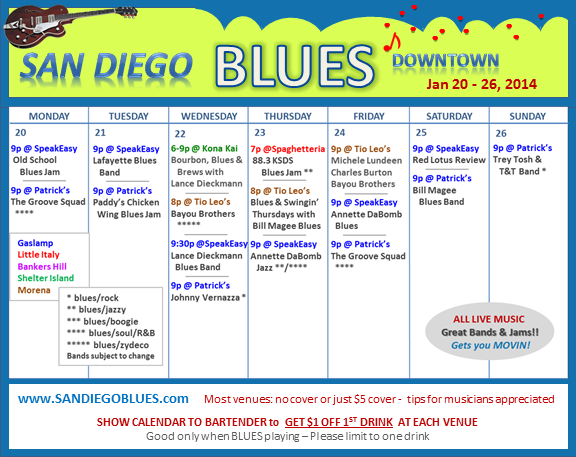 In addition to what is on the calendar here, there is always the BLUSD jam at House of Blues on Wednesdays from 7-11pm.

I will be away this week in Memphis (cold weather here I come) at the International Blues Challenge, cheering for our San Diego blues society’s (BLUSD) IBC champion, Fuzzy Rankins Blues Band.  We all leave tomorrow, so you can catch Fuzzy tonight at the SpeakEasy before he goes.  I will keep you posted on how they are doing during the week!

Bill Magee is a blues man through and through, and he brings his southern blues sound to Patrick’s about once a month.  He was there last night doing his thing, which always gets me and a lot of others out on the dance floor.

Len Rainey has Chicago roots, and you can hear it in the way he plays the blues.  You can find him regularly at Patrick’s Pub and Humphreys.

Last night I finally got some video of his band playing at Patrick’s, which includes Walter Gentry on sax, Johnny Vernazza on guitar, Matt on drums, and Len singing and playing bass.  Here he is performing a favorite cover song Black Cat Bone.

Every Wednesday night on the free stage at House of Blues is a good blues jam, hosted by JammingOut.net and BLUSD.  Last night ended with members of the house band back up on stage doing the cover song Woke Up This Morning (Kevin Cooper on bass guitar, Lafayette Falkquay on lead guitar and Packy B on rhythm guitar) along with John Rokas on drums, who was visiting from Cleveland, OH.

Every Tuesday night you can catch Lafayette Falkquay and his blues band playing at the Gaslamp SpeakEasy.  Lafayette is one of those southern bluesman you don’t get to hear often enough, so its always a treat for me to listen to him perform.  Here is a video from last night with Lafayette singing Going to Louisiana, supported by Chris Terrell on drums and Ronnie Baumslater on bass.

There were a number of guitar players who showed up at the SpeakEasy blues jam Monday, and in this video they all jammed and did solos.  From left to right, Jon Fai, Patrick Jarrell, Brandon Cerquedo and Fuzzy Rankins.  Bob Prater was on bass and Bruce Hutcherson on drums.

Here is some video from Monday night’s blues jam at the Speakeasy.  Fuzzy Rankins on lead guitar, Irakli Aladash on bass guitar and Patrick Jarrell on rhythm guitar, along with an out-of-town visitor, John Rokas, on drums.

Thanks to Irakli for sending me this clip.