To celebrate the birthdays of JammingOut at HOB host Rosa Lea Schiavone and guitarist Rich Giglio, who is frequently at the Wednesday night blues jam, Rich hosted a house jam this past weekend that brought a lot of people together to play blues and enjoy great food and friends.

Here’s Big Slim performing the BB cover song Thrill is Gone, along with Rich, Doyle Thomas and Stoney B on guitars, Tom Slotkin on harmonica, Kelly on drums (who you really can’t see), Ray Brown on trumpet, and I didn’t catch who was playing the sax. 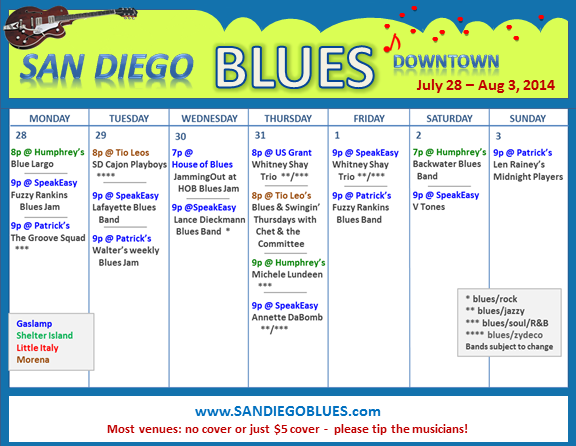 This week is a lot like last week – no San Diego blues at Kona Kai and not much blues at Patrick’s Gaslamp Pub.  But it’s a good week at Humphrey’s Backstage and SpeakEasy (as usual).  And the blues jams… well you never know, because you never know who might show up or who happens to be in town, and it can blow you away when it all lines up.

I’m learning that Humphrey’s Backstage Lounge doesn’t tend to start on time and can be an hour off, so for now I’m going to list the times one hour later than they post on their website.  Just a heads up. 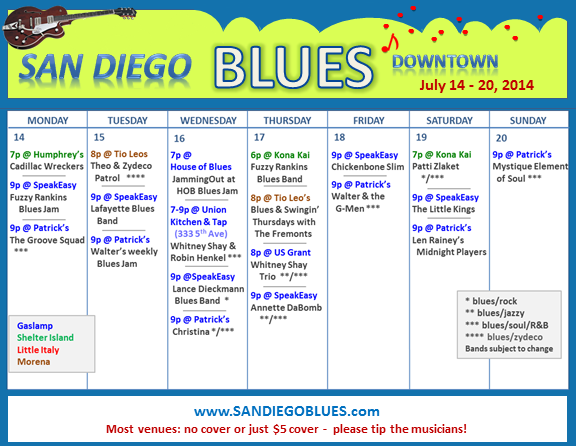 It’s a fairly typical San Diego blues week around downtown, although a bit light for straight up blues at Patrick’s and just one night of blues at Humphrey’s.

There is more R&D/soul bands performing than blues bands, so you might want to check out the jams if you want blues on Monday (SpeakEasy), Tuesday (Patrick’s – often has some R&B too) and Wednesday (JammingOut at HOB).

Many of the regular musicians were at the JammingOut at HOB last night, including Nick Butterfield and Rich Giglio – on guitars together (once again) and performing “English Invasion” songs.  As Rich explained to me, from British bands in the 60s and 70s who brought their blues rock to America, which they both enjoy.

Here they are playing a Cream cover song Crossroads, with Nick singing.  The vocal mic didn’t pick up as well as it usually does – not sure why.  They are on stage with David Falkquay on bass, Duke Ventra on drums and Dave Lewis on harmonica. 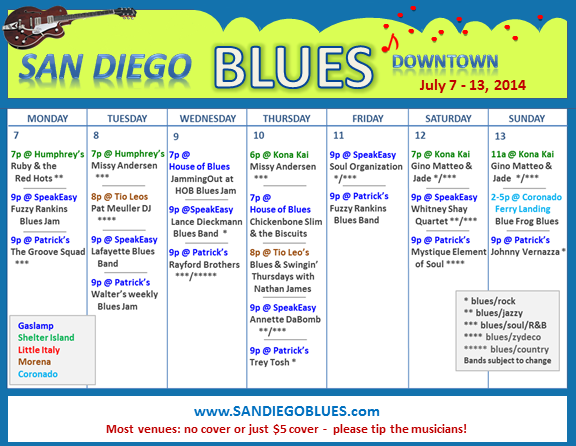 There is bit more blues this week than we’ve had downtown for a while, and one reason is the reopening of the Kona Kai lounge after their Spring renovations.  Missy Andersen will be back there on Wednesday and Gino & Jade are also back!!

I’ve also added the Coronado Ferry Landing to the calendar, since they play blues there periodically on Sunday afternoons.  This week is Blue Frog Blues.

And of course we have the usual San Diego blues jams on Mondays (SpeakEasy), Tuesdays (Patrick’s) and Wednesdays at the House of Blues free stage.  I’m also pleased that Patrick’s has mostly blues again this week, so it’s another great week of blues every single night.

Patrick’s Pub almost always has blues on a Sunday night, and I went to hear some favorite locals: Len Rainey on bass and Johnny Vernazza on guitar, accompanied by Danny Martinez on drums.  These guys are all regulars at Patrick’s, and I always enjoy hearing them play.

Here’s Len singing cover song Kiddio.  Patrick’s is always dark, so it’s hard to get good crisp video.  I lightened it up, and it’s still grainy. But you can see and hear them fairly well.

And here they are performing cover song Born Under a Bad Sign.

If you have been following this blog for a while, you know I often go to the JammingOut at HOB.  I can’t always get to the other jams around town, so I try to make it to this one as often as I can.  It’s always good and often there are newcomers to the jam who rock the night.  There were quite a few musicians there who I hadn’t seen before.

One of them was Maria Woodard, a jazz and Latin singer in San Diego, who got up and did a number of tunes.  Here she is singing the Fats Domino song Kansas City.  With her on stage was Rich Giglio and Doyle Thomas on guitars, Tom Safreed on harmonica, Dale Davis on bass and Steve Douglas on drums.

Nick Butterfield was back again, and he gave us an awesome performance of that great Creedence Clearwater Revival cover tune Born on the Bayou.  He’s joined by Rich on guitar, Dale on bass, Dave Good on saxophone, Richie Strell playing the accordion, Reggie Ford on drums, and I’m not sure who was playing the harmonica.  Enjoy!

Later, Harmonica John Frazer played and sang Steve Miller band cover song Your Cash Ain’t Nothing But Trash with Will Lovalot on guitar, Steve Welles on bass, and I believe it was Max on drums.