It was a slow (always that way after a holiday weekend) but good jam night at Patrick’s Pub.  Here is a clip of newcomer to the jam, Fred Lawson, on bass and singing You Better Pray.  Great song and some great solos from Johnny Vernazza on guitar, Chuck Arcilla on sax, and Walter Gentry on sax – our beloved jam host, along with Matthew Burgher on drums.

Note: Video is a bit grainy and a few times out of focus, which happens when the lighting isn’t that good where the sax players stand.  But still very worth watching. 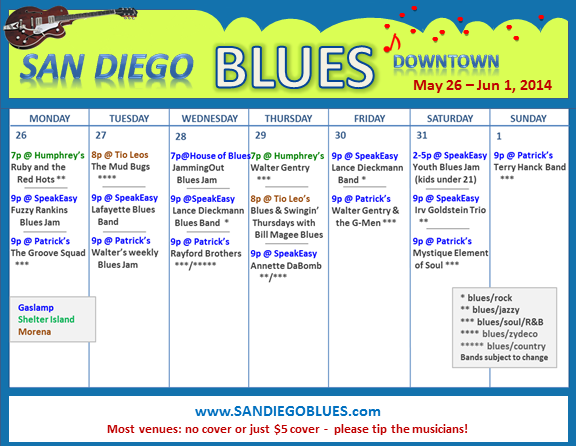 Memorial Day kicks off another full week of blues around town. This week most of the live blues is at the Gaslamp SpeakEasy, Patrick’s Pub and Humphrey’s Backstage Lounge. So it’s a bit light, but still lots of good music every single night.

At JammingOut at HOB this Wednesday there will be a local featured band, as they do now the last Wednesday of the month. This time it is Bi-Polar Express, who is also playing at the Harley Davidson in Little Italy next Saturday from noon-1:30.

And we have a band coming in from out of town on Sunday night, the Terry Hanck band (Terry plays sax) – based out of San Francisco, which will be playing at Patrick’s. They won the blues category in the International Songwriting Competition last year and are now back out on tour. I checked out their website, and they sound great!

I have wanted to hear this band for a while, and I finally saw them the other night at the Gaslamp SpeakEasy.  They will be back there again at the end of June.  This is Doc Holiday’s organ-influenced and soul-infused sound that runs the gamut of jazz, blues, rock and soul – with John Hunt (a fabulous guitarist) and Billy Wear on drums.  Everyone seemed to really enjoy them.

There was a wide mix of tune genres, and these 2 videos just give you a taste of what these guys play.

This first video highlights Doc on the organ in the song A Real Good ‘Un.

And in this video, John Hunt does a fabulous medley of cover songs Susie Q and Born on the Bayou.

Every Wednesday night, “JammingOut at HOB” hosts a blues jam that has developed a wonderful following in its first year, and this past Wednesday they celebrated their 1st anniversary downstairs at the House of Blues.  It was a fun evening, and here are some videos I got – the lighting wasn’t great so its a bit dark and grainy, but most of it is good.

Here is Dona Aguinaldo, one of a number of wonderful female vocalists that night, who got up to sing Etta James’ cover At Last.  Wow!  I just wish the lighting had been better… On stage with her (and doing their own jamming solos) is Bob Sortillon (standing next to her) and Rich Giglio on guitars, Tom Safreed on harmonica, Dave Lindgren on bass, and Steve Douglas on drums.  Bob, Rick and Dave also each sang some great songs, but the videos didn’t turn out.

Then Christine Gilardi performed Bonnie Rait’s cover song Love Me Like a Man.  She rocks it with Somerset Barnard on guitar, Tom Safreed on harmonica, Yasha Susoeff on sax, Victor Franklin on bass and Michael Minor on drums.

Afterwards Victoria Wasserman got up with them and nailed it with that so familiar BB King (amongst others) cover song Stormy Monday.

Somerset Barnard, visiting from Brisbane Australia for a few weeks, got us up and dancing to another favorite, Got My Mojo Working.

And to end the evening we had Len Rainey, a favorite local bluesman, take the stage and sing, as only Len can do it, the cover song Kiddio.  He’s joined by Doyle Thomas on guitar, Kevin Cooper on keyboards, Michael Minor on drums, David Lewis on harps – as well as Steve Lang.  Again the video is a bit dark, even after lightening it up as much as I could.

The final song brought Lafayette Falkquay on the stage to join Len on bass, and they had a fun exchange as they performed Slow Down Baby together.

I only captured a bit of the evening.  We also had a number of brass players (more sax, trumpet and trombone), and other performers who made it a special anniversary evening.

Next week the jam is back upstairs, but it starts 2 hours later at 9pm (for just this week).
San Diego Blues

This week we have a nice mix of blues – from straight up blues to blues mixed in with zydeco, swing, jazz, R&B and soul.  Silky Sol is new in town – from St. Louis, and she has an amazing soul voice (think Aretha Franklin).  You can catch her Saturday afternoon at the SpeakEasy from 2-5pm.

Jams are happening as usual on Monday (Gaslamp SpeakEasy), Tuesday (Patrick’s Pub) and Wednesday (JammingOut at House of Blues AND also at Humphrey’s), so there are two jams now happening regularly on Wednesday nights.

NOTE: JammingOut at HOB on Wednesday will start at 9pm, not 7pm – this week only.

Last night at Walter Gentry’s Chicken Wings blues jam at Patrick’s, we had a house full of brass (sax, trumpet and trombone).

In this video, visiting Australian Somerset Barnard is playing guitar and singing a Mojo Webb (another Australian bluesman) tune called Hands Like Mine.  The vocal sound quality isn’t that great, but the rest is really good and catches solos from everyone on stage.  Along with Somerset is Leonard Lee on guitar, Bert Hammer (visiting from Canada) on drums, Gary Stutts on bass, Steve Lang on harmonica, Chuck Arcilla on sax, Carlos Serrano on trumpet, Phil Lozano on trombone, and also on sax – a 21 year old I’m waiting to get the name of, who was amazing.

This is an interesting blues week.  Most of the bands that are scheduled are not fully blues, but more soul, R&B, zydeco, country and pop.  The jams will have the most straight up blues, with the exception of Christian Hastings (Mon), Lafayette (Tues) and Bill Magee’s band (Thurs) – they are all blues!

Wednesday is becoming jam night, with open mic at House of Blues, Humphrey’s and out at Proud Mary’s (in Kearney Mesa).  And of course there is Walter’s jam on Tuesday and Fuzzy’s jam on Monday.

The JammingOut/BLUSD jam at House of Blues will be held downstairs this week in the Delta Room to celebrate their 1st year anniversary.  I’ll be there for sure!

If you haven’t been to the annual Gator by the Bay, add it to your list next year.  It is a 3-day festival at Spanish Landing Park (across from the airport) with 5 stages of non-stop bands, mostly zydeco but also blues, boogie and some jazz.

This was my first year, and I was impressed by how well the event is organized, the good selection of booth fair, the bands and all the shade options!!  I’m always hoping for enough shade at these outdoor events!

Here’s a good video of Annette DaBomb with the Lance Dieckmann Band (Lance on harmonica, Phil Diiorio on guitar, Bob Prater on bass and Becky Russell on drums) performing the Ray Charles cover song, Night Time is the Right Time.  Sadly the video got cut off before they finished the song, but Enjoy the 3 1/2 minutes we did get.  They sounded great on this stage.

Walter Gentry’s Tuesday night jam was another packed evening on and off the stage.  Who ever said blues is boring hasn’t been to a San Diego jam!

Here we have Ray Zvetini playing guitar and singing an Albert King (and later Eric Clapton) cover song Crosscut Saw.  With him on stage are Doyle Thomas on guitar, Seth Webster on bass, Lisa Viegas on drums, Tim Sutherland on keyboard, Ray Brown on trumpet and John Brooks on sax.

Some of the musicians switched out and Ray Brown took over the vocals and belted out that great Commodore’s cover song Brick House.  Justin Fools joined in on harmonica, Fuzzy Rankins played the keyboard, Matt Taylor was back on drums, and I’m not sure who was playing the other guitar.  Seth was still on bass, John was on sax, and I didn’t catch who joined them on trumpet.  The sound got a bit loud, so it didn’t pick up too well on my mic.

Earlier that night, Somerset Barnard, visiting from Australia, was performing one of his own tunes Nobody’s Fault.  He was joined by Seth Webster on bass guitar, Johnny Vernazza on guitar, Matt Taylor on drums, Ray Brown on trumpet and John Brooks on sax. 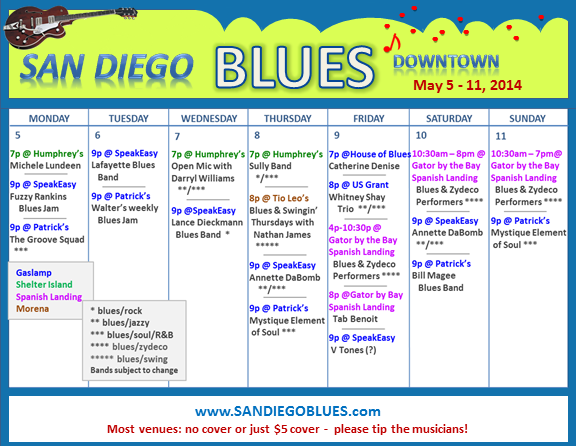 This coming weekend is the 3-day Gator by the Bay (Spanish Landing Park – across from the airport on Harbor Drive) event, featuring blues and zydeco music.  For more details and the huge lineup of bands, check out www.gatorbythebay.com.

Humphries seems to have shifted its calendar (at least for this month) to blues on Mondays, R&B on Thursdays and open mic R&B/soul/gospel/jazz/blues on Wednesdays.  Kona Kai (also on Shelter Island) is undergoing extensive renovations, so there is less blues on the island right now.

Patrick’s Pub is adding more rock to the schedule, which means fewer nights of blues on our calendar.  Yet House of Blues seems to be adding more nights of blues, and this week Catherine Denise out of Antonio, TX will be here with her award-winning blues playing.

Speaking of House of Blues… there is no Wednesday night jam this week.  But there is the 88.3 Jazz blues jam that night from 6:30-9 at Proud Mary’s (up in Kearney Mesa), which used to be in Little Italy.